Another point of confusion with many new R users is the idea of an R package. R packages extend the functionality of R by providing additional functions, data, and documentation. They are written by a worldwide community of R users and can be downloaded for free from the internet.

A good analogy for R packages is they are like apps you can download onto a mobile phone:

So R is like a new mobile phone: while it has a certain amount of features when you use it for the first time, it doesn’t have everything. R packages are like the apps you can download onto your phone from Apple’s App Store or Android’s Google Play.

Let’s continue this analogy by considering the Instagram app for editing and sharing pictures. Say you have purchased a new phone and you would like to share a photo you have just taken with friends on Instagram. You need to:

Once Instagram is open on your phone, you can then proceed to share your photo with your friends and family. The process is very similar for using an R package. You need to:

Let’s perform these two steps for the ggplot2 package for data visualization.

There are two ways to install an R package: an easy way and a more advanced way. Let’s install the ggplot2 package the easy way first as shown in Figure 1.5. In the Files pane of RStudio: 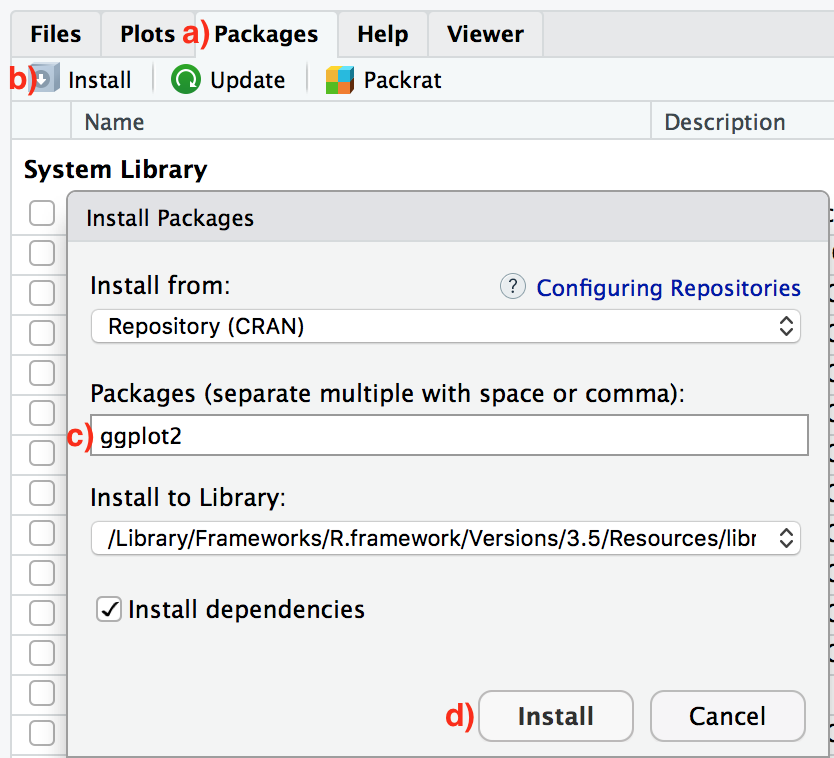 An alternative but slightly less convenient way to install a package is by typing install.packages("ggplot2") in the console pane of RStudio and pressing Return/Enter on your keyboard. Note you must include the quotation marks around the name of the package.

Much like an app on your phone, you only have to install a package once. However, if you want to update a previously installed package to a newer version, you need to reinstall it by repeating the earlier steps.

(LC1.1) Repeat the earlier installation steps, but for the dplyr, nycflights13, and knitr packages. This will install the earlier mentioned dplyr package for data wrangling, the nycflights13 package containing data on all domestic flights leaving a NYC airport in 2013, and the knitr package for generating easy-to-read tables in R. We’ll use these packages in the next section.

Note that if you’d like your output on your computer to match up exactly with the output presented throughout the book, you may want to use the exact versions of the packages that we used. You can find a full listing of these packages and their versions in Appendix E. This likely won’t be relevant for novices, but we included it for reproducibility reasons.

Recall that after you’ve installed a package, you need to “load it.” In other words, you need to “open it.” We do this by using the library() command.

If after running the earlier code, a blinking cursor returns next to the > “prompt” sign, it means you were successful and the ggplot2 package is now loaded and ready to use. If, however, you get a red “error message” that reads ...

... it means that you didn’t successfully install it. This is an example of an “error message” we discussed in Subsection 1.2.2. If you get this error message, go back to Subsection 1.3.1 on R package installation and make sure to install the ggplot2 package before proceeding.

(LC1.2) “Load” the dplyr, nycflights13, and knitr packages as well by repeating the earlier steps.

One very common mistake new R users make when wanting to use particular packages is they forget to “load” them first by using the library() command we just saw. Remember: you have to load each package you want to use every time you start RStudio. If you don’t first “load” a package, but attempt to use one of its features, you’ll see an error message similar to:

This is a different error message than the one you just saw on a package not having been installed yet. R is telling you that you are trying to use a function in a package that has not yet been “loaded.” R doesn’t know where to find the function you are using. Almost all new users forget to do this when starting out, and it is a little annoying to get used to doing it. However, you’ll remember with practice and after some time it will become second nature for you.