Let’s focus our attention on the drinks data frame and look at its first 5 rows:

After reading the help file by running ?drinks, you’ll see that drinks is a data frame containing results from a survey of the average number of servings of beer, spirits, and wine consumed in 193 countries. This data was originally reported on FiveThirtyEight.com in Mona Chalabi’s article: “Dear Mona Followup: Where Do People Drink The Most Beer, Wine And Spirits?”.

Let’s apply some of the data wrangling verbs we learned in Chapter 3 on the drinks data frame:

and save the resulting data frame in drinks_smaller:

Let’s now ask ourselves a question: “Using the drinks_smaller data frame, how would we create the side-by-side barplot in Figure 4.2?”. Recall we saw barplots displaying two categorical variables in Subsection 2.8.3. 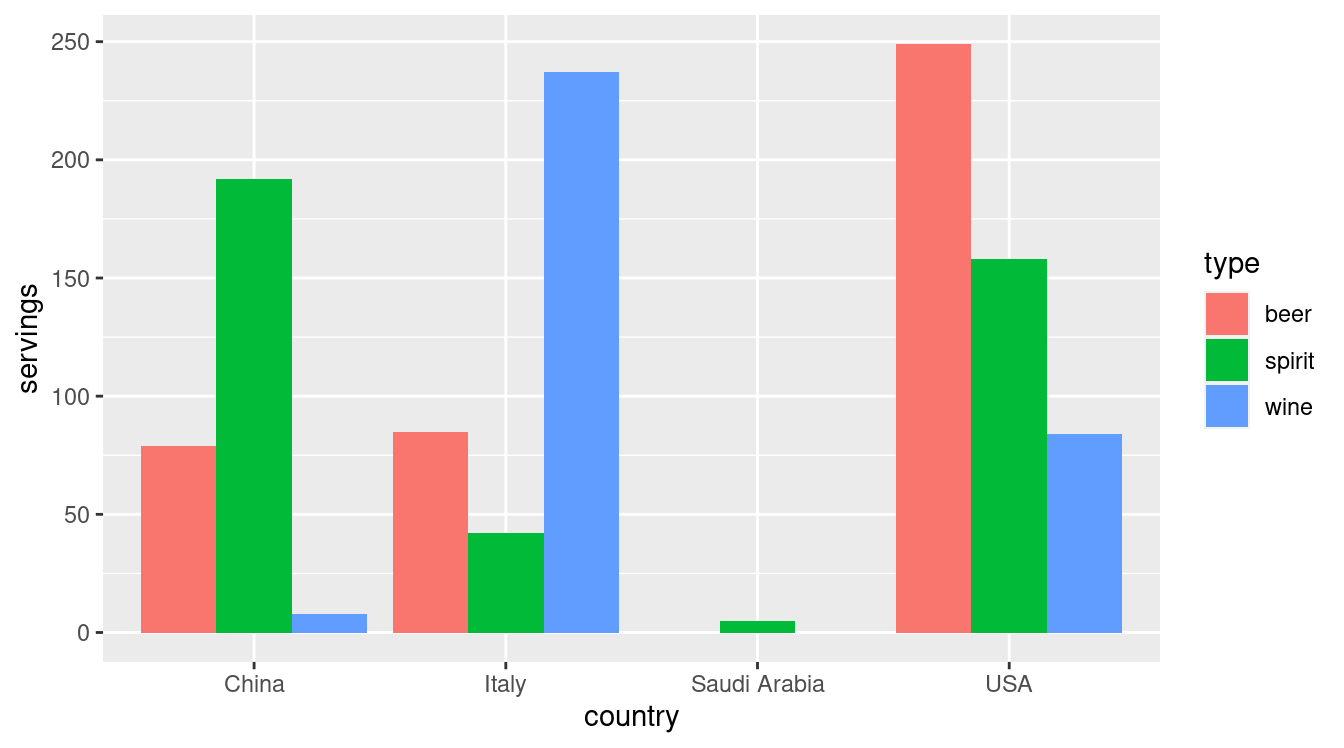 Let’s break down the grammar of graphics we introduced in Section 2.1:

Observe that drinks_smaller has three separate variables beer, spirit, and wine. In order to use the ggplot() function to recreate the barplot in Figure 4.2 however, we need a single variable type with three possible values: beer, spirit, and wine. We could then map this type variable to the fill aesthetic of our plot. In other words, to recreate the barplot in Figure 4.2, our data frame would have to look like this:

You have surely heard the word “tidy” in your life:

What does it mean for your data to be “tidy”? While “tidy” has a clear English meaning of “organized,” the word “tidy” in data science using R means that your data follows a standardized format. We will follow Hadley Wickham’s definition of “tidy” data (Wickham 2014) shown also in Figure 4.3:

A dataset is a collection of values, usually either numbers (if quantitative) or strings AKA text data (if qualitative/categorical). Values are organised in two ways. Every value belongs to a variable and an observation. A variable contains all values that measure the same underlying attribute (like height, temperature, duration) across units. An observation contains all values measured on the same unit (like a person, or a day, or a city) across attributes.

“Tidy” data is a standard way of mapping the meaning of a dataset to its structure. A dataset is messy or tidy depending on how rows, columns and tables are matched up with observations, variables and types. In tidy data:

For example, say you have the following table of stock prices in Table 4.1:

Although the data are neatly organized in a rectangular spreadsheet-type format, they do not follow the definition of data in “tidy” format. While there are three variables corresponding to three unique pieces of information (date, stock name, and stock price), there are not three columns. In “tidy” data format, each variable should be its own column, as shown in Table 4.2. Notice that both tables present the same information, but in different formats.

Now we have the requisite three columns Date, Stock Name, and Stock Price. On the other hand, consider the data in Table 4.3.

In this case, even though the variable “Boeing Price” occurs just like in our non-“tidy” data in Table 4.1, the data is “tidy” since there are three variables corresponding to three unique pieces of information: Date, Boeing price, and the Weather that particular day.

(LC4.1) What are common characteristics of “tidy” data frames?

In this book so far, you’ve only seen data frames that were already in “tidy” format. Furthermore, for the rest of this book, you’ll mostly only see data frames that are already in “tidy” format as well. This is not always the case however with all datasets in the world. If your original data frame is in wide (non-“tidy”) format and you would like to use the ggplot2 or dplyr packages, you will first have to convert it to “tidy” format. To do so, we recommend using the pivot_longer() function in the tidyr package (Wickham and Henry 2020).

Going back to our drinks_smaller data frame from earlier:

We convert it to “tidy” format by using the pivot_longer() function from the tidyr package as follows:

We set the arguments to pivot_longer() as follows:

The third argument here of cols is a little nuanced, so let’s consider code that’s written slightly differently but that produces the same output:

Note that the third argument now specifies which columns we want to “tidy” with c(beer, spirit, wine), instead of the columns we don’t want to “tidy” using -country. We use the c() function to create a vector of the columns in drinks_smaller that we’d like to “tidy.” Note that since these three columns appear one after another in the drinks_smaller data frame, we could also do the following for the cols argument:

With our drinks_smaller_tidy “tidy” formatted data frame, we can now produce the barplot you saw in Figure 4.2 using geom_col(). This is done in Figure 4.4. Recall from Section 2.8 on barplots that we use geom_col() and not geom_bar(), since we would like to map the “pre-counted” servings variable to the y-aesthetic of the bars.

Converting “wide” format data to “tidy” format often confuses new R users. The only way to learn to get comfortable with the pivot_longer() function is with practice, practice, and more practice using different datasets. For example, run ?pivot_longer and look at the examples in the bottom of the help file. We’ll show another example of using pivot_longer() to convert a “wide” formatted data frame to “tidy” format in Section 4.3.

If however you want to convert a “tidy” data frame to “wide” format, you will need to use the pivot_wider() function instead. Run ?pivot_wider and look at the examples in the bottom of the help file for examples.

You can also view examples of both pivot_longer() and pivot_wider() on the tidyverse.org webpage. There’s a nice example to check out the different functions available for data tidying and a case study using data from the World Health Organization on that webpage. Furthermore, each week the R4DS Online Learning Community posts a dataset in the weekly #TidyTuesday event that might serve as a nice place for you to find other data to explore and transform.

(LC4.3) Take a look at the airline_safety data frame included in the fivethirtyeight data package. Run the following:

After reading the help file by running ?airline_safety, we see that airline_safety is a data frame containing information on different airline companies’ safety records. This data was originally reported on the data journalism website, FiveThirtyEight.com, in Nate Silver’s article, “Should Travelers Avoid Flying Airlines That Have Had Crashes in the Past?”. Let’s only consider the variables airlines and those relating to fatalities for simplicity:

Recall the nycflights13 package we introduced in Section 1.4 with data about all domestic flights departing from New York City in 2013. Let’s revisit the flights data frame by running View(flights). We saw that flights has a rectangular shape, with each of its 336,776 rows corresponding to a flight and each of its 22 columns corresponding to different characteristics/measurements of each flight. This satisfied the first two criteria of the definition of “tidy” data from Subsection 4.2.1: that “Each variable forms a column” and “Each observation forms a row.” But what about the third property of “tidy” data that “Each type of observational unit forms a table”?

The organization of the information into these five data frames follows the third “tidy” data property: observations corresponding to the same observational unit should be saved in the same table, i.e., data frame. You could think of this property as the old English expression: “birds of a feather flock together.”

Kim, Albert Y., Chester Ismay, and Jennifer Chunn. 2019. Fivethirtyeight: Data and Code Behind the Stories and Interactives at ’Fivethirtyeight’. https://CRAN.R-project.org/package=fivethirtyeight.

Wickham, Hadley. 2019a. Nycflights13: Flights That Departed Nyc in 2013. https://CRAN.R-project.org/package=nycflights13.