To answer such questions, we’ll use the gapminder data frame included in the gapminder package. This dataset has international development statistics such as life expectancy, GDP per capita, and population for 142 countries for 5-year intervals between 1952 and 2007. Recall we visualized some of this data in Figure 2.1 in Subsection 2.1.2 on the grammar of graphics.

The data on the 142 countries can be found in the gapminder data frame included in the gapminder package. However, to keep things simple, let’s filter() for only those observations/rows corresponding to the year 2007. Additionally, let’s select() only the subset of the variables we’ll consider in this chapter. We’ll save this data in a new data frame called gapminder2007:

Let’s perform the first common step in an exploratory data analysis: looking at the raw data values. You can do this by using RStudio’s spreadsheet viewer or by using the glimpse() command as introduced in Subsection 1.4.3 on exploring data frames:

Observe that Observations: 142 indicates that there are 142 rows/observations in gapminder2007, where each row corresponds to one country. In other words, the observational unit is an individual country. Furthermore, observe that the variable continent is of type <fct>, which stands for factor, which is R’s way of encoding categorical variables.

A full description of all the variables included in gapminder can be found by reading the associated help file (run ?gapminder in the console). However, let’s fully describe only the 4 variables we selected in gapminder2007:

Note that random sampling will likely produce a different subset of 5 rows for you than what’s shown. Now that we’ve looked at the raw values in our gapminder2007 data frame and got a sense of the data, let’s move on to computing summary statistics. Let’s once again apply the skim() function from the skimr package. Recall from our previous EDA that this function takes in a data frame, “skims” it, and returns commonly used summary statistics. Let’s take our gapminder2007 data frame, select() only the outcome and explanatory variables lifeExp and continent, and pipe them into the skim() function:

We can answer this question by performing the last of the three common steps in an exploratory data analysis: creating data visualizations. Let’s visualize the distribution of our outcome variable \(y\) = lifeExp in Figure 5.7. 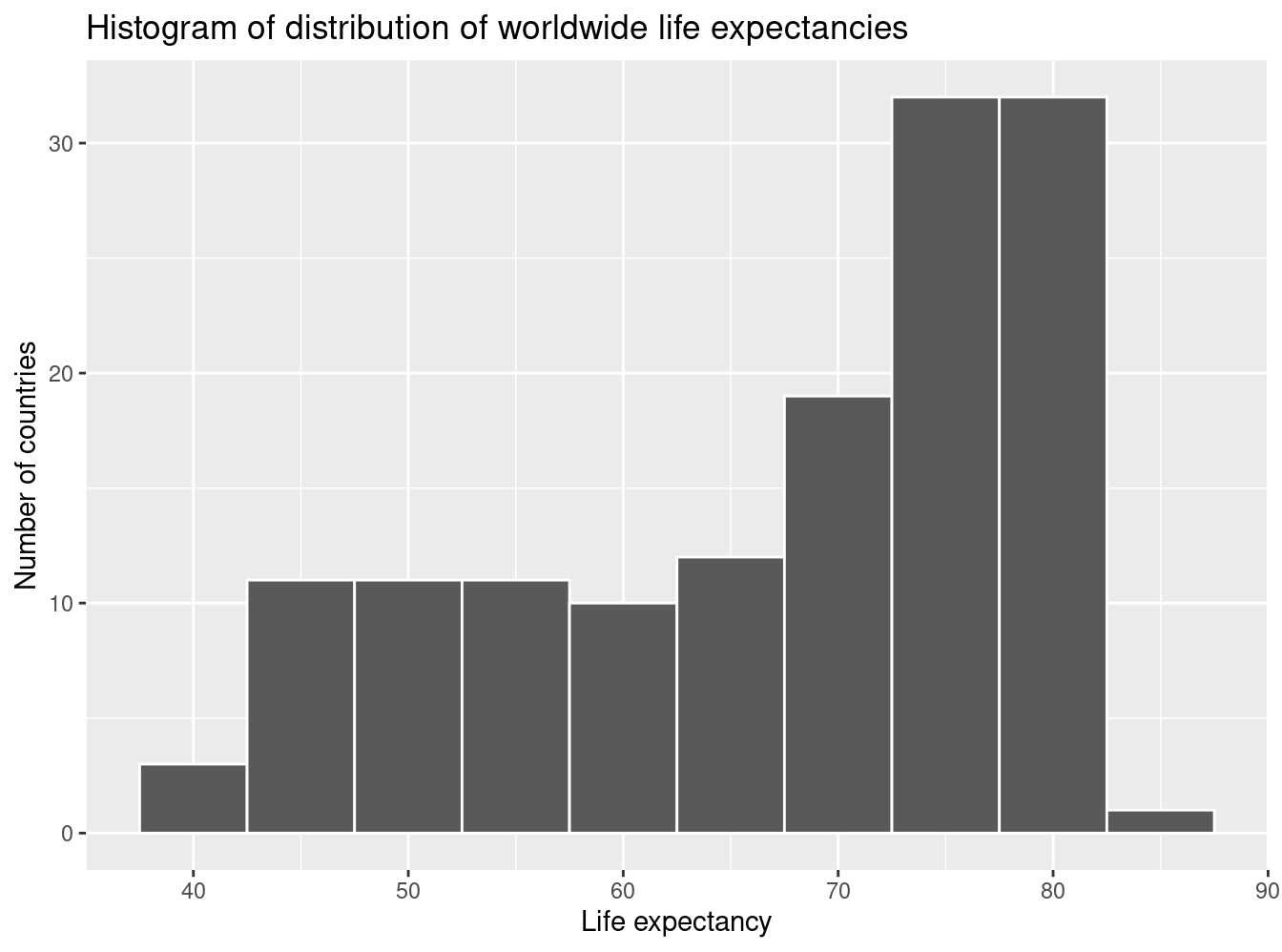 Remember, however, that we want to compare life expectancies both between continents and within continents. In other words, our visualizations need to incorporate some notion of the variable continent. We can do this easily with a faceted histogram. Recall from Section 2.6 that facets allow us to split a visualization by the different values of another variable. We display the resulting visualization in Figure 5.8 by adding a facet_wrap(~ continent, nrow = 2) layer. 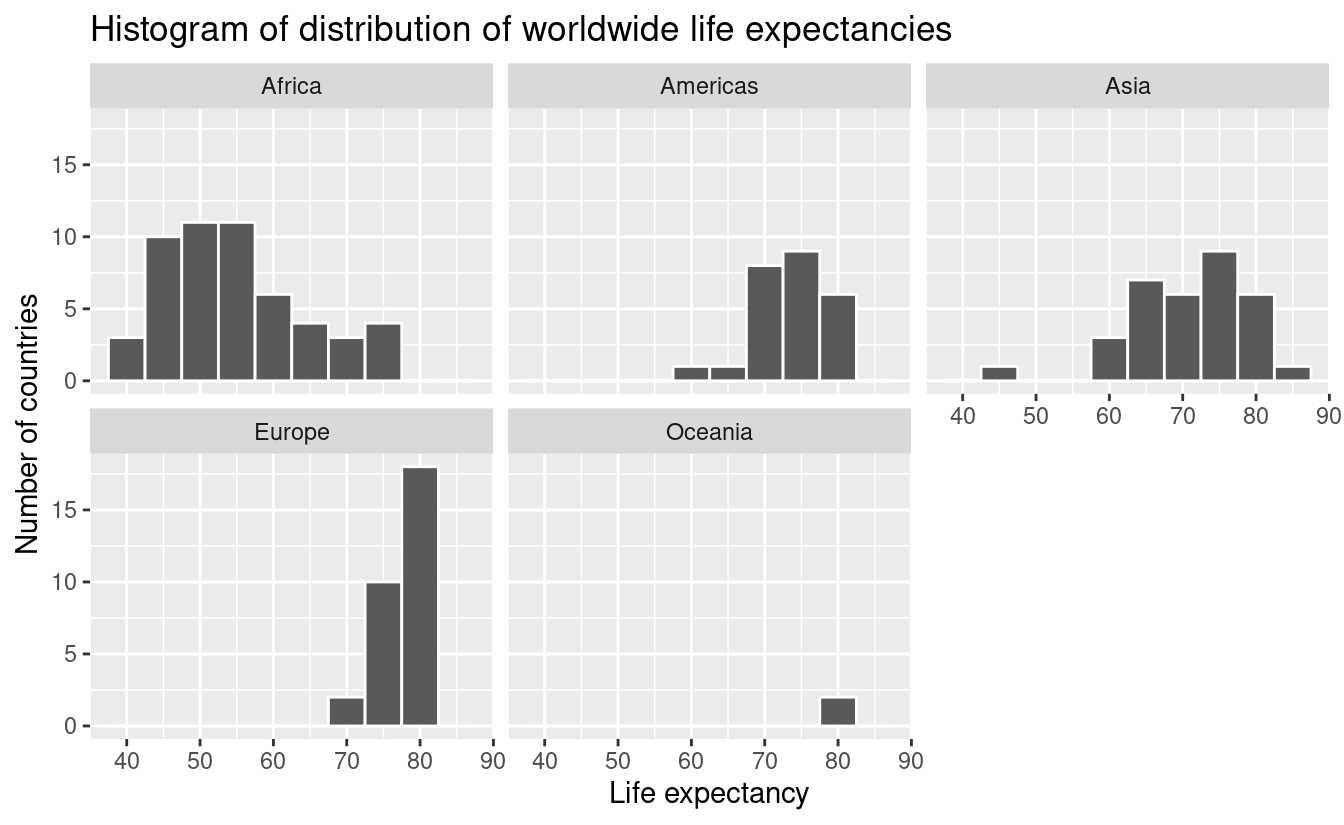 Some people prefer comparing the distributions of a numerical variable between different levels of a categorical variable using a boxplot instead of a faceted histogram. This is because we can make quick comparisons between the categorical variable’s levels with imaginary horizontal lines. For example, observe in Figure 5.9 that we can quickly convince ourselves that Oceania has the highest median life expectancies by drawing an imaginary horizontal line at \(y\) = 80. Furthermore, as we observed in the faceted histogram in Figure 5.8, Africa and Asia have the largest variation in life expectancy as evidenced by their large interquartile ranges (the heights of the boxes).

Let’s compute the median and mean life expectancy for each continent with a little more data wrangling and display the results in Table 5.6.

Observe the order of the second column median life expectancy: Africa is lowest, the Americas and Asia are next with similar medians, then Europe, then Oceania. This ordering corresponds to the ordering of the solid black lines inside the boxes in our side-by-side boxplot in Figure 5.9.

(LC5.4) Conduct a new exploratory data analysis with the same explanatory variable \(x\) being continent but with gdpPercap as the new outcome variable \(y\). What can you say about the differences in GDP per capita between continents based on this exploration?

In Subsection 5.1.2 we introduced simple linear regression, which involves modeling the relationship between a numerical outcome variable \(y\) and a numerical explanatory variable \(x\). In our life expectancy example, we now instead have a categorical explanatory variable continent. Our model will not yield a “best-fitting” regression line like in Figure 5.4, but rather offsets relative to a baseline for comparison.

As we did in Subsection 5.1.2 when studying the relationship between teaching scores and “beauty” scores, let’s output the regression table for this model. Recall that this is done in two steps:

Let’s once again focus on the values in the term and estimate columns of Table 5.8. Why are there now 5 rows? Let’s break them down one-by-one:

To summarize, the 5 values in the estimate column in Table 5.8 correspond to the “baseline for comparison” continent Africa (the intercept) as well as four “offsets” from this baseline for the remaining 4 continents: the Americas, Asia, Europe, and Oceania.

You might be asking at this point why was Africa chosen as the “baseline for comparison” group. This is the case for no other reason than it comes first alphabetically of the five continents; by default R arranges factors/categorical variables in alphanumeric order. You can change this baseline group to be another continent if you manipulate the variable continent’s factor “levels” using the forcats package. See Chapter 15 of R for Data Science (Grolemund and Wickham 2017) for examples.

Whoa! That looks daunting! Don’t fret, however, as once you understand what all the elements mean, things simplify greatly. First, \(\mathbb{1}_{A}(x)\) is what’s known in mathematics as an “indicator function.” It returns only one of two possible values, 0 and 1, where

In a statistical modeling context, this is also known as a dummy variable. In our case, let’s consider the first such indicator variable \(\mathbb{1}_{\text{Amer}}(x)\). This indicator function returns 1 if a country is in the Americas, 0 otherwise:

Second, \(b_0\) corresponds to the intercept as before; in this case, it’s the mean life expectancy of all countries in Africa. Third, the \(b_{\text{Amer}}\), \(b_{\text{Asia}}\), \(b_{\text{Euro}}\), and \(b_{\text{Ocean}}\) represent the 4 “offsets relative to the baseline for comparison” in the regression table output in Table 5.8: continentAmericas, continentAsia, continentEurope, and continentOceania.

In other words, all that’s left is the intercept \(b_0\), corresponding to the average life expectancy of African countries of 54.8 years. Next, say we are considering a country in the Americas. In this case, only the indicator function \(\mathbb{1}_{\text{Amer}}(x)\) for the Americas will equal 1, while all the others will equal 0, and thus:

which is the mean life expectancy for countries in the Americas of 73.6 years in Table 5.7. Note the “offset from the baseline for comparison” is +18.8 years.

Let’s do one more. Say we are considering a country in Asia. In this case, only the indicator function \(\mathbb{1}_{\text{Asia}}(x)\) for Asia will equal 1, while all the others will equal 0, and thus:

which is the mean life expectancy for Asian countries of 70.7 years in Table 5.7. The “offset from the baseline for comparison” here is +15.9 years.

Let’s generalize this idea a bit. If we fit a linear regression model using a categorical explanatory variable \(x\) that has \(k\) possible categories, the regression table will return an intercept and \(k - 1\) “offsets.” In our case, since there are \(k = 5\) continents, the regression model returns an intercept corresponding to the baseline for comparison group of Africa and \(k - 1 = 4\) offsets corresponding to the Americas, Asia, Europe, and Oceania.

Understanding a regression table output when you’re using a categorical explanatory variable is a topic those new to regression often struggle with. The only real remedy for these struggles is practice, practice, practice. However, once you equip yourselves with an understanding of how to create regression models using categorical explanatory variables, you’ll be able to incorporate many new variables into your models, given the large amount of the world’s data that is categorical. If you feel like you’re still struggling at this point, however, we suggest you closely compare Tables 5.7 and 5.8 and note how you can compute all the values from one table using the values in the other.

(LC5.5) Fit a new linear regression using lm(gdpPercap ~ continent, data = gapminder2007) where gdpPercap is the new outcome variable \(y\). Get information about the “best-fitting” line from the regression table by applying the get_regression_table() function. How do the regression results match up with the results from your previous exploratory data analysis?

Recall in Subsection 5.1.3, we defined the following three concepts:

We obtained these values and other values using the get_regression_points() function from the moderndive package. This time, however, let’s add an argument setting ID = "country": this is telling the function to use the variable country in gapminder2007 as an identification variable in the output. This will help contextualize our analysis by matching values to countries.

Observe in Table 5.9 that lifeExp_hat contains the fitted values \(\widehat{y}\) = \(\widehat{\text{lifeExp}}\). If you look closely, there are only 5 possible values for lifeExp_hat. These correspond to the five mean life expectancies for the 5 continents that we displayed in Table 5.7 and computed using the values in the estimate column of the regression table in Table 5.8.

(LC5.6) Using either the sorting functionality of RStudio’s spreadsheet viewer or using the data wrangling tools you learned in Chapter 3, identify the five countries with the five smallest (most negative) residuals? What do these negative residuals say about their life expectancy relative to their continents’ life expectancy?

(LC5.7) Repeat this process, but identify the five countries with the five largest (most positive) residuals. What do these positive residuals say about their life expectancy relative to their continents’ life expectancy?