5.3.1 Correlation is not necessarily causation

Throughout this chapter we’ve been cautious when interpreting regression slope coefficients. We always discussed the “associated” effect of an explanatory variable \(x\) on an outcome variable \(y\). For example, our statement from Subsection 5.1.2 that “for every increase of 1 unit in bty_avg, there is an associated increase of on average 0.067 units of score.” We include the term “associated” to be extra careful not to suggest we are making a causal statement. So while “beauty” score of bty_avg is positively correlated with teaching score, we can’t necessarily make any statements about “beauty” scores’ direct causal effect on teaching score without more information on how this study was conducted. Here is another example: a not-so-great medical doctor goes through medical records and finds that patients who slept with their shoes on tended to wake up more with headaches. So this doctor declares, “Sleeping with shoes on causes headaches!”

FIGURE 5.10: Does sleeping with shoes on cause headaches?

However, there is a good chance that if someone is sleeping with their shoes on, it’s potentially because they are intoxicated from alcohol. Furthermore, higher levels of drinking leads to more hangovers, and hence more headaches. The amount of alcohol consumption here is what’s known as a confounding/lurking variable. It “lurks” behind the scenes, confounding the causal relationship (if any) of “sleeping with shoes on” with “waking up with a headache.” We can summarize this in Figure 5.11 with a causal graph where: 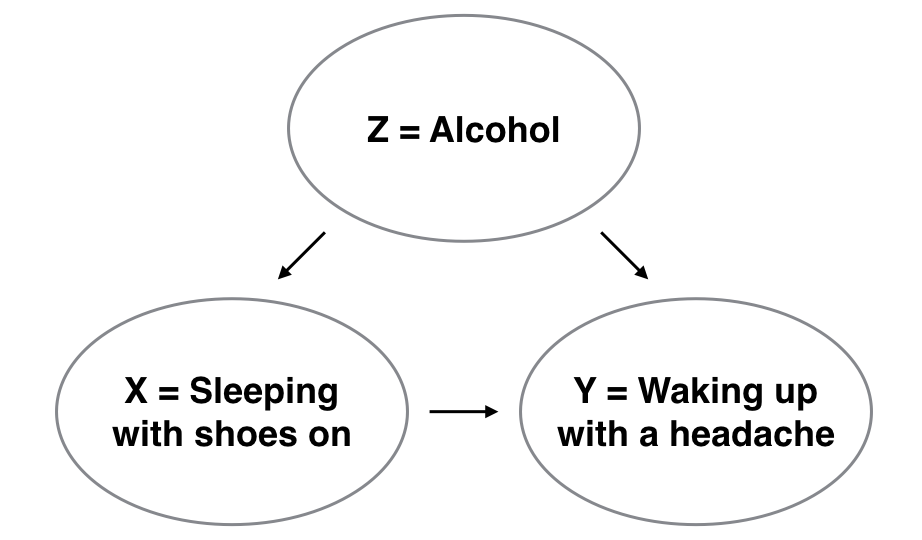 To study the relationship between Y and X, we could use a regression model where the outcome variable is set to Y and the explanatory variable is set to be X, as you’ve been doing throughout this chapter. However, Figure 5.11 also includes a third variable with arrows pointing at both X and Y:

Alcohol will cause people to be both more likely to sleep with their shoes on as well as be more likely to wake up with a headache. Thus any regression model of the relationship between X and Y should also use Z as an explanatory variable. In other words, our doctor needs to take into account who had been drinking the night before. In the next chapter, we’ll start covering multiple regression models that allow us to incorporate more than one variable in our regression models.

Establishing causation is a tricky problem and frequently takes either carefully designed experiments or methods to control for the effects of confounding variables. Both these approaches attempt, as best they can, either to take all possible confounding variables into account or negate their impact. This allows researchers to focus only on the relationship of interest: the relationship between the outcome variable Y and the treatment variable X.

As you read news stories, be careful not to fall into the trap of thinking that correlation necessarily implies causation. Check out the Spurious Correlations website for some rather comical examples of variables that are correlated, but are definitely not causally related.

Regression lines are also known as “best-fitting” lines. But what do we mean by “best”? Let’s unpack the criteria that is used in regression to determine “best.” Recall Figure 5.6, where for an instructor with a beauty score of \(x = 7.333\) we mark the observed value \(y\) with a circle, the fitted value \(\widehat{y}\) with a square, and the residual \(y - \widehat{y}\) with an arrow. We re-display Figure 5.6 in the top-left plot of Figure 5.12 in addition to three more arbitrarily chosen course instructors: 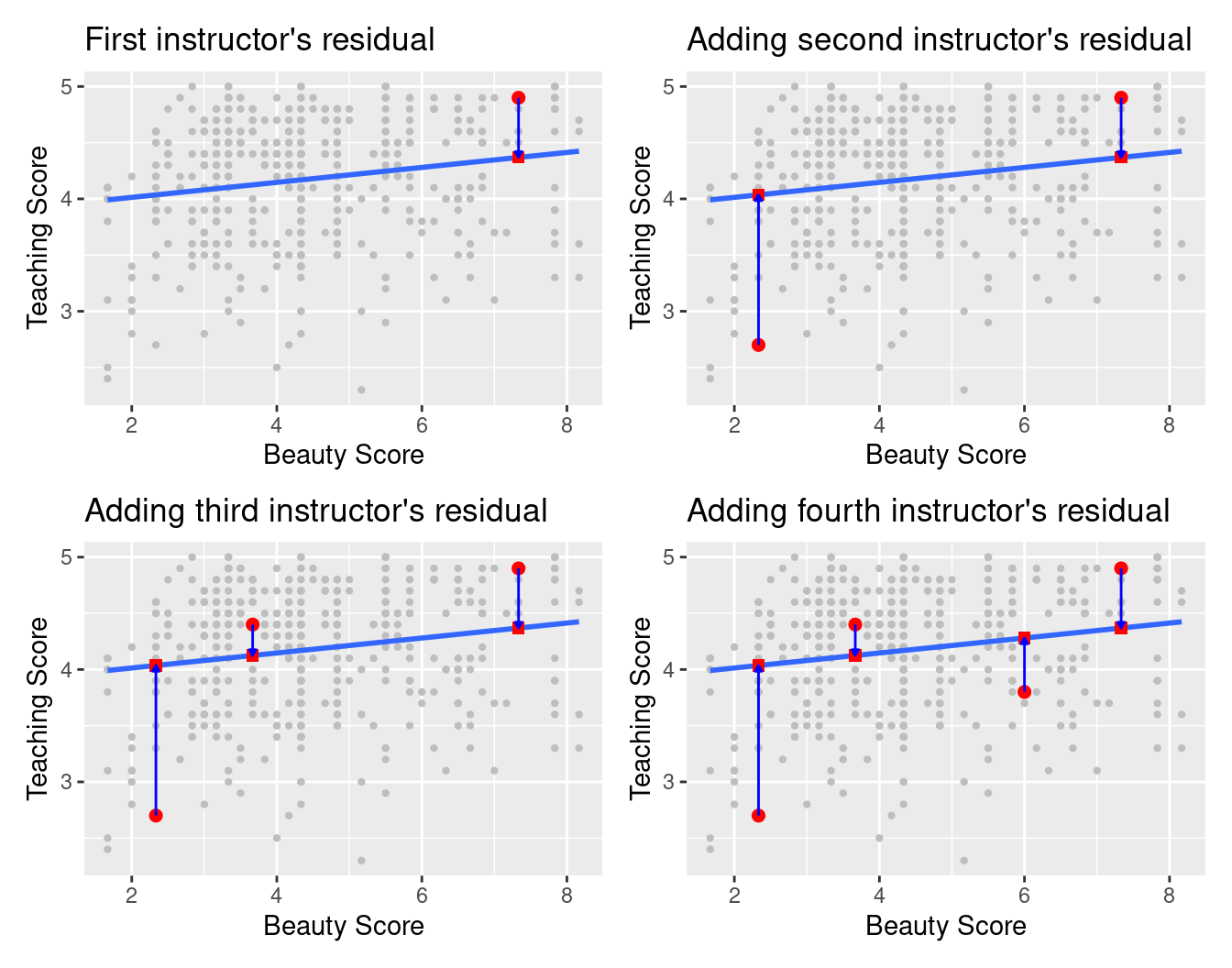 The three other plots refer to:

Let’s use our data wrangling tools from Chapter 3 to compute the sum of squared residuals exactly:

Any other straight line drawn in the figure would yield a sum of squared residuals greater than 132. This is a mathematically guaranteed fact that you can prove using calculus and linear algebra. That’s why alternative names for the linear regression line are the best-fitting line and the least-squares line. Why do we square the residuals (i.e., the arrow lengths)? So that both positive and negative deviations of the same amount are treated equally. 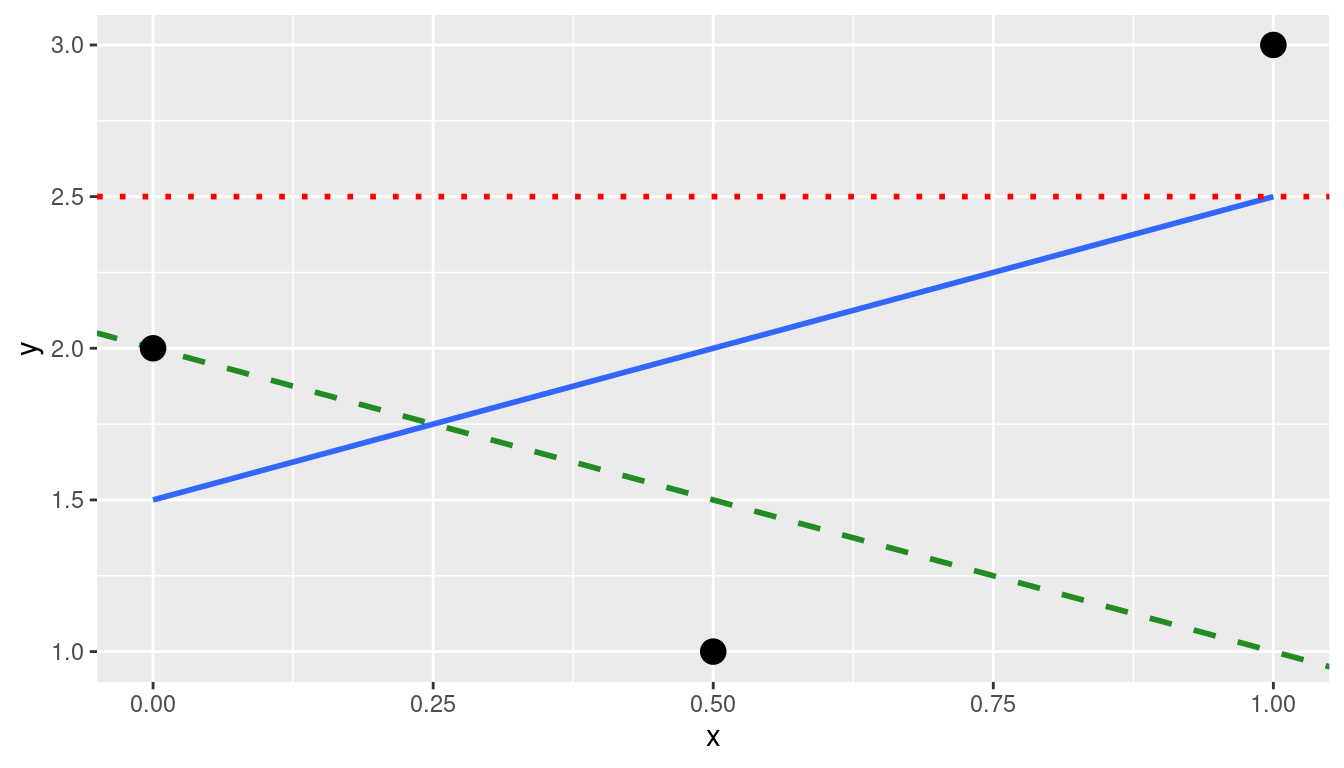 FIGURE 5.13: Regression line and two others.

Compute the sum of squared residuals by hand for each line and show that of these three lines, the regression line in blue has the smallest value.

Recall in this chapter we introduced two functions from the moderndive package:

What is going on behind the scenes with the get_regression_table() and get_regression_points() functions? We mentioned in Subsection 5.1.2 that these were examples of wrapper functions. Such functions take other pre-existing functions and “wrap” them into single functions that hide the user from their inner workings. This way all the user needs to worry about is what the inputs look like and what the outputs look like. In this subsection, we’ll “get under the hood” of these functions and see how the “engine” of these wrapper functions works.

Recall our two-step process to generate a regression table from Subsection 5.1.2:

and “wraps” them into a single function that takes in a saved lm() linear model, here score_model, and returns a regression table saved as a “tidy” data frame. Here is how we used the tidy() and clean_names() functions to produce Table 5.11:

Yikes! That’s a lot of code! So, in order to simplify your lives, we made the editorial decision to “wrap” all the code into get_regression_table(), freeing you from the need to understand the inner workings of the function. Note that the mutate_if() function is from the dplyr package and applies the round() function to three significant digits precision only to those variables that are numerical.

In this case, it outputs only the variables of interest to students learning regression: the outcome variable \(y\) (score), all explanatory/predictor variables (bty_avg), all resulting fitted values \(\hat{y}\) used by applying the equation of the regression line to bty_avg, and the residual \(y - \hat{y}\).

If you’re even more curious about how these and other wrapper functions work, take a look at the source code for these functions on GitHub.