Let’s now switch gears and consider multiple regression models where instead of one numerical and one categorical explanatory variable, we now have two numerical explanatory variables. The dataset we’ll use is from An Introduction to Statistical Learning with Applications in R (ISLR), an intermediate-level textbook on statistical and machine learning (James et al. 2017). Its accompanying ISLR R package contains the datasets to which the authors apply various machine learning methods.

One frequently used dataset in this book is the Credit dataset, where the outcome variable of interest is the credit card debt of 400 individuals. Other variables like income, credit limit, credit rating, and age are included as well. Note that the Credit data is not based on real individuals’ financial information, but rather is a simulated dataset used for educational purposes.

In this section, we’ll fit a regression model where we have

Let’s load the Credit dataset. To keep things simple let’s select() the subset of the variables we’ll consider in this chapter, and save this data in the new data frame credit_ch6. Notice our slightly different use of the select() verb here than we introduced in Subsection 3.8.1. For example, we’ll select the Balance variable from Credit but then save it with a new variable name debt. We do this because here the term “debt” is easier to interpret than “balance.”

You can observe the effect of our use of select() in the first common step of an exploratory data analysis: looking at the raw values either in RStudio’s spreadsheet viewer or by using glimpse().

Furthermore, let’s look at a random sample of five out of the 400 credit card holders in Table 6.8. Once again, note that due to the random nature of the sampling, you will likely end up with a different subset of five rows.

Now that we’ve looked at the raw values in our credit_ch6 data frame and got a sense of the data, let’s move on to the next common step in an exploratory data analysis: computing summary statistics. Let’s use the skim() function from the skimr package, being sure to only select() the columns of interest for our model:

Or we can simultaneously compute them by returning a correlation matrix which we display in Table 6.9. We can see the correlation coefficient for any pair of variables by looking them up in the appropriate row/column combination.

For example, the correlation coefficient of:

So in our case since credit_limit and income are highly correlated, if we knew someone’s credit_limit, we could make pretty good guesses about their income as well. Thus, these two variables provide somewhat redundant information. However, we’ll leave discussion on how to work with collinear explanatory variables to a more intermediate-level book on regression modeling.

Let’s visualize the relationship of the outcome variable with each of the two explanatory variables in two separate plots in Figure 6.5.

Observe there is a positive relationship between credit limit and credit card debt: as credit limit increases so also does credit card debt. This is consistent with the strongly positive correlation coefficient of 0.862 we computed earlier. In the case of income, the positive relationship doesn’t appear as strong, given the weakly positive correlation coefficient of 0.464.

However, the two plots in Figure 6.5 only focus on the relationship of the outcome variable with each of the two explanatory variables separately. To visualize the joint relationship of all three variables simultaneously, we need a 3-dimensional (3D) scatterplot as seen in Figure 6.6. Each of the 400 observations in the credit_ch6 data frame are marked with a blue point where 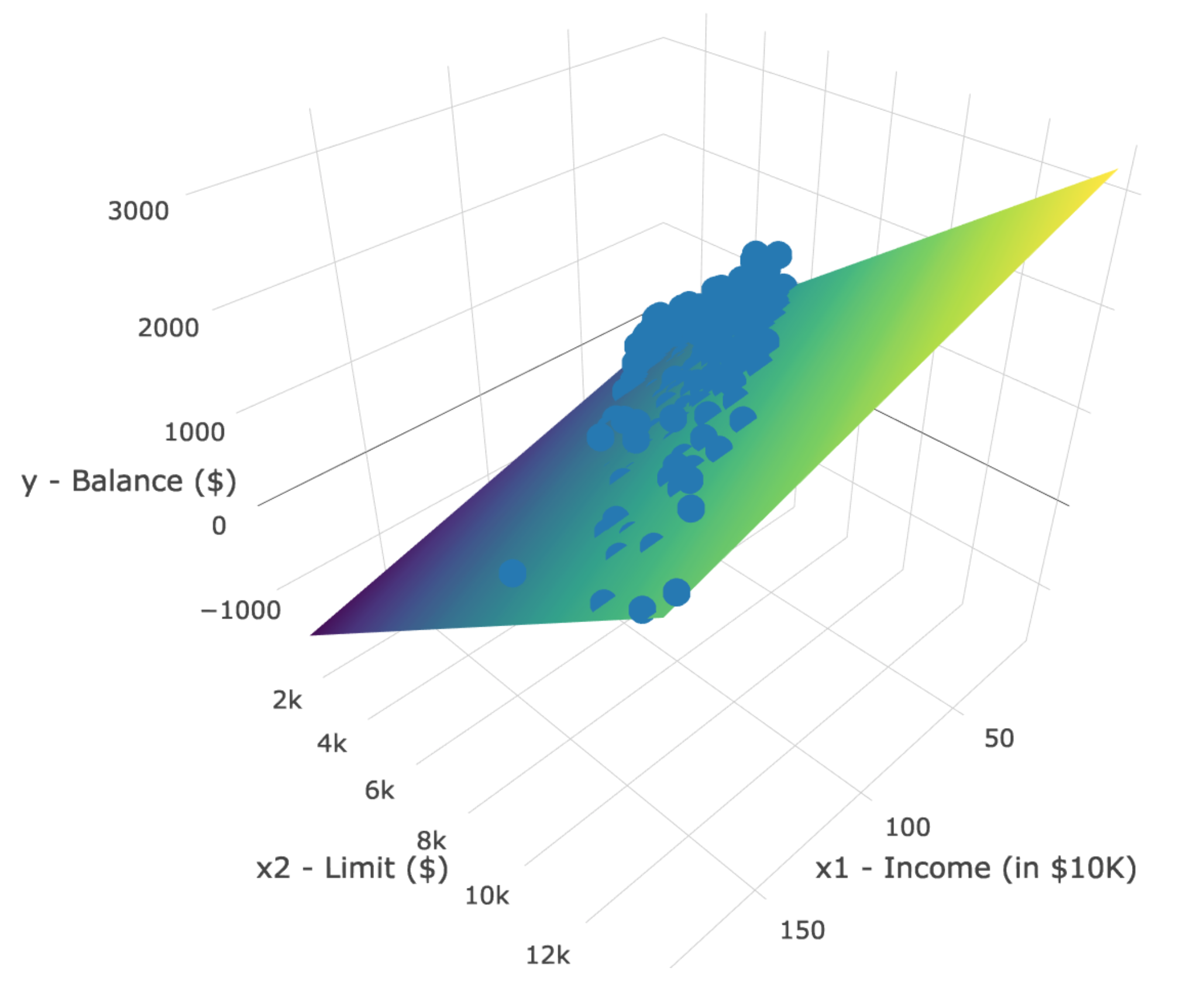 Furthermore, we also include the regression plane. Recall from Subsection 5.3.2 that regression lines are “best-fitting” in that of all possible lines we can draw through a cloud of points, the regression line minimizes the sum of squared residuals. This concept also extends to models with two numerical explanatory variables. The difference is instead of a “best-fitting” line, we now have a “best-fitting” plane that similarly minimizes the sum of squared residuals. Head to this website to open an interactive version of this plot in your browser.

(LC6.2) Conduct a new exploratory data analysis with the same outcome variable \(y\) debt but with credit_rating and age as the new explanatory variables \(x_1\) and \(x_2\). What can you say about the relationship between a credit card holder’s debt and their credit rating and age?

Let’s now fit a regression model and get the regression table corresponding to the regression plane in Figure 6.6. To keep things brief in this subsection, we won’t consider an interaction model for the two numerical explanatory variables income and credit_limit like we did in Subsection 6.1.2 using the model formula score ~ age * gender. Rather we’ll only consider a model fit with a formula of the form y ~ x1 + x2. Confusingly, however, since we now have a regression plane instead of multiple lines, the label “parallel slopes” doesn’t apply when you have two numerical explanatory variables. Just as we have done multiple times throughout Chapters 5 and this chapter, the regression table for this model using our two-step process is in Table 6.10.

Second, the credit_limit value is $0.264. Taking into account all the other explanatory variables in our model, for every increase of one dollar in credit_limit, there is an associated increase of on average $0.26 in credit card debt. Just as we did in Subsection 5.1.2, we are cautious not to imply causality as we saw in Subsection 5.3.1 that “correlation is not necessarily causation.” We do this merely stating there was an associated increase.

Third, income = -$7.66. Taking into account all other explanatory variables in our model, for every increase of one unit of income ($1000 in actual income), there is an associated decrease of, on average, $7.66 in credit card debt.

Putting these results together, the equation of the regression plane that gives us fitted values \(\widehat{y}\) = \(\widehat{\text{debt}}\) is:

(LC6.3) Fit a new simple linear regression using lm(debt ~ credit_rating + age, data = credit_ch6) where credit_rating and age are the new numerical explanatory variables \(x_1\) and \(x_2\). Get information about the “best-fitting” regression plane from the regression table by applying the get_regression_table() function. How do the regression results match up with the results from your previous exploratory data analysis?

Let’s also compute all fitted values and residuals for our regression model using the get_regression_points() function and present only the first 10 rows of output in Table 6.11. Remember that the coordinates of each of the blue points in our 3D scatterplot in Figure 6.6 can be found in the income, credit_limit, and debt columns. The fitted values on the regression plane are found in the debt_hat column and are computed using our equation for the regression plane in the previous section: