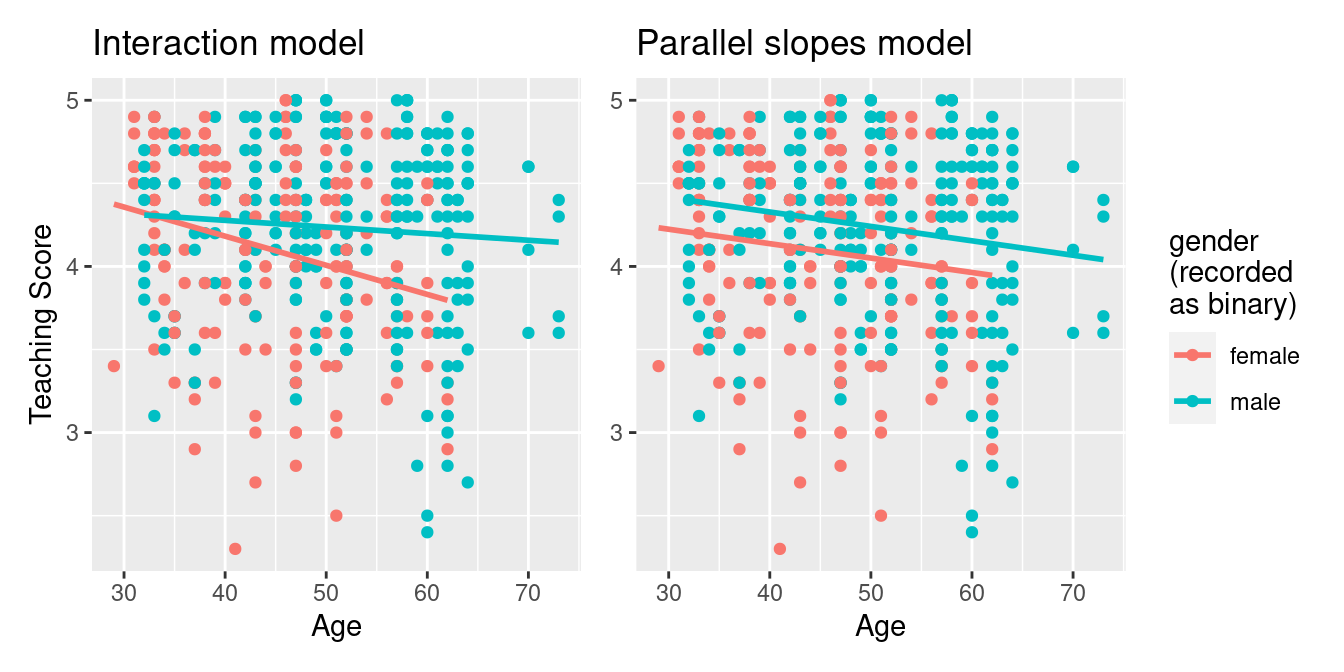 The answer lies in a philosophical principle known as “Occam’s Razor.” It states that, “all other things being equal, simpler solutions are more likely to be correct than complex ones.” When viewed in a modeling framework, Occam’s Razor can be restated as, “all other things being equal, simpler models are to be preferred over complex ones.” In other words, we should only favor the more complex model if the additional complexity is warranted.

Let’s revisit the equations for the regression line for both the interaction and parallel slopes model:

The interaction model is “more complex” in that there is an additional \(b_{\text{age,male}} \cdot \text{age} \cdot \mathbb{1}_{\text{is male}}\) interaction term in the equation not present for the parallel slopes model. Or viewed alternatively, the regression table for the interaction model in Table 6.3 has four rows, whereas the regression table for the parallel slopes model in Table 6.5 has three rows. The question becomes: “Is this additional complexity warranted?”. In this case, it can be argued that this additional complexity is warranted, as evidenced by the clear x-shaped pattern of the two regression lines in the left-hand plot of Figure 6.7.

However, let’s consider an example where the additional complexity might not be warranted. Let’s consider the MA_schools data included in the moderndive package which contains 2017 data on Massachusetts public high schools provided by the Massachusetts Department of Education. For more details, read the help file for this data by running ?MA_schools in the console.

Let’s model the numerical outcome variable \(y\), average SAT math score for a given high school, as a function of two explanatory variables:

Let’s create visualizations of both the interaction and parallel slopes model once again and display the output in Figure 6.8. Recall from Subsection 6.1.3 that the geom_parallel_slopes() function is a special purpose function included in the moderndive package, since the geom_smooth() method in the ggplot2 package does not have a convenient way to plot parallel slopes models.

What you have just performed is a rudimentary model selection: choosing which model fits data best among a set of candidate models. While the model selection approach we just took was visual in nature and hence somewhat qualitative, more statistically rigorous methods for model selection exist in the fields of multiple regression and statistical/machine learning.

Recall from Table 6.9 that the correlation coefficient between income in thousands of dollars and credit card debt was 0.464. What if instead we looked at the correlation coefficient between income and credit card debt, but where income was in dollars and not thousands of dollars? This can be done by multiplying income by 1000.

On the other hand, the multiple regression results in Table 6.10 suggested that the relationship between debt and income was negative. We re-display this information in Table 6.15.

Observe how the slope for income is \(-7.663\) and, most importantly for now, it is negative. This contradicts our observation in Figure 6.9 that the relationship is positive. How can this be? Recall the interpretation of the slope for income in the context of a multiple regression model: taking into account all the other explanatory variables in our model, for every increase of one unit in income (i.e., $1000), there is an associated decrease of on average $7.663 in debt.

In other words, while in isolation, the relationship between debt and income may be positive, when taking into account credit_limit as well, this relationship becomes negative. These seemingly paradoxical results are due to a phenomenon aptly named Simpson’s Paradox. Simpson’s Paradox occurs when trends that exist for the data in aggregate either disappear or reverse when the data are broken down into groups.

Let’s show how Simpson’s Paradox manifests itself in the credit_ch6 data. Let’s first visualize the distribution of the numerical explanatory variable credit_limit with a histogram in Figure 6.10.

Now in Figure 6.11 let’s re-display two versions of the scatterplot of debt and income from Figure 6.9, but with a slight twist:

In other words, the location of the 400 points are the same in both scatterplots, but the right-hand plot shows an additional variable of information: credit_limit bracket.