In both our tactile and our virtual sampling activities, we used sampling for the purpose of estimation. We extracted samples in order to estimate the proportion of the bowl’s balls that are red. We used sampling as a less time-consuming approach than performing an exhaustive count of all the balls. Our virtual sampling activity built up to the results shown in Figure 7.12 and Table 7.1: comparing 1000 proportions red based on samples of size 25, 50, and 100. This was our first attempt at understanding two key concepts relating to sampling for estimation:

Let’s now introduce some terminology and notation as well as statistical definitions related to sampling. Given the number of new words you’ll need to learn, you will likely have to read this section a few times. Keep in mind, however, that all of the concepts underlying these terminology, notation, and definitions tie directly to the concepts underlying our tactile and virtual sampling activities. It will simply take time and practice to master them.

Here is a list of terminology and mathematical notation relating to sampling.

First, a population is a collection of individuals or observations we are interested in. This is also commonly denoted as a study population. We mathematically denote the population’s size using upper-case \(N\). In our sampling activities, the (study) population is the collection of \(N\) = 2400 identically sized red and white balls contained in the bowl.

Third, a census is an exhaustive enumeration or counting of all \(N\) individuals or observations in the population in order to compute the population parameter’s value exactly. In our sampling activity, this would correspond to counting the number of balls out of \(N\) = 2400 that are red and computing the population proportion \(p\) that are red exactly. When the number \(N\) of individuals or observations in our population is large as was the case with our bowl, a census can be quite expensive in terms of time, energy, and money.

Fourth, sampling is the act of collecting a sample from the population when we don’t have the means to perform a census. We mathematically denote the sample’s size using lower case \(n\), as opposed to upper case \(N\) which denotes the population’s size. Typically the sample size \(n\) is much smaller than the population size \(N\). Thus sampling is a much cheaper alternative than performing a census. In our sampling activities, we used shovels with 25, 50, and 100 slots to extract samples of size \(n\) = 25, \(n\) = 50, and \(n\) = 100.

Ninth and lastly, the idea of random sampling. We say a sampling procedure is random if we sample randomly from the population in an unbiased fashion. In our sampling activities, this would correspond to sufficiently mixing the bowl before each use of the shovel.

Phew, that’s a lot of new terminology and notation to learn! Let’s put them all together to describe the paradigm of sampling.

Specific to our sampling activity:

(LC7.8) In the case of our bowl activity, what is the population parameter? Do we know its value?

(LC7.9) What would performing a census in our bowl activity correspond to? Why did we not perform a census?

(LC7.10) What purpose do point estimates serve in general? What is the name of the point estimate specific to our bowl activity? What is its mathematical notation?

(LC7.11) How did we ensure that our tactile samples using the shovel were random?

(LC7.12) Why is it important that sampling be done at random?

(LC7.13) What are we inferring about the bowl based on the samples using the shovel?

For example, observe the centers of all three sampling distributions: they are all roughly centered around \(0.4 = 40\%\). Furthermore, observe that while we are somewhat likely to observe sample proportions of red balls of \(0.2 = 20\%\) when using the shovel with 25 slots, we will almost never observe a proportion of 20% when using the shovel with 100 slots. Observe also the effect of sample size on the sampling variation. As the sample size \(n\) increases from 25 to 50 to 100, the variation of the sampling distribution decreases and thus the values cluster more and more tightly around the same center of around 40%. We quantified this variation using the standard deviation of our sample proportions in Table 7.1, which we display again as Table 7.2:

So as the sample size increases, the standard deviation of the proportion of red balls decreases. This type of standard deviation has another special name: standard error. Standard errors quantify the effect of sampling variation induced on our estimates. In other words, they quantify how much we can expect different proportions of a shovel’s balls that are red to vary from one sample to another sample to another sample, and so on. As a general rule, as sample size increases, the standard error decreases.

To help reinforce these concepts, let’s re-display Figure 7.12 but using our new terminology, notation, and definitions relating to sampling in Figure 7.14. 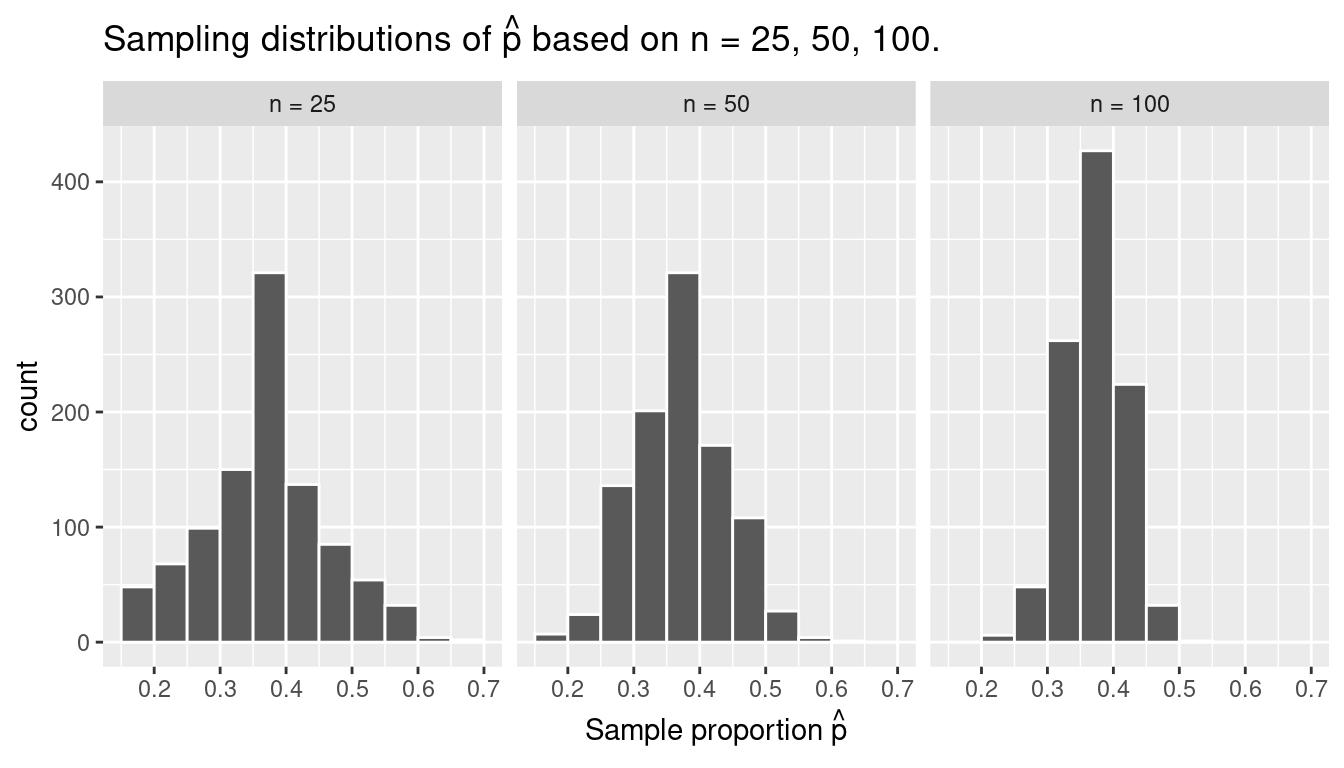 Remember the key message of this last table: that as the sample size \(n\) goes up, the “typical” error of your point estimate will go down, as quantified by the standard error.

(LC7.14) What purpose did the sampling distributions serve?

(LC7.15) What does the standard error of the sample proportion \(\widehat{p}\) quantify?

Let’s recap this section so far. We’ve seen that if a sample is generated at random, then the resulting point estimate is a “good guess” of the true unknown population parameter. In our sampling activities, since we made sure to mix the balls first before extracting a sample with the shovel, the resulting sample proportion \(\widehat{p}\) of the shovel’s balls that were red was a “good guess” of the population proportion \(p\) of the bowl’s balls that were red.

However, what do we mean by our point estimate being a “good guess”? Sometimes, we’ll get an estimate that is less than the true value of the population parameter, while at other times we’ll get an estimate that is greater. This is due to sampling variation. However, despite this sampling variation, our estimates will “on average” be correct and thus will be centered at the true value. This is because our sampling was done at random and thus in an unbiased fashion.

In our sampling activities, sometimes our sample proportion \(\widehat{p}\) was less than the true population proportion \(p\), while at other times it was greater. This was due to the sampling variability. However, despite this sampling variation, our sample proportions \(\widehat{p}\) were “on average” correct and thus were centered at the true value of the population proportion \(p\). This is because we mixed our bowl before taking samples and thus the sampling was done at random and thus in an unbiased fashion. This is also known as having an accurate estimate.

Let’s re-display our sampling distributions from Figures 7.12 and 7.14, but now with a vertical red line marking the true population proportion \(p\) of balls that are red = 37.5% in Figure 7.15. We see that while there is a certain amount of error in the sample proportions \(\widehat{p}\) for all three sampling distributions, on average the \(\widehat{p}\) are centered at the true population proportion red \(p\). 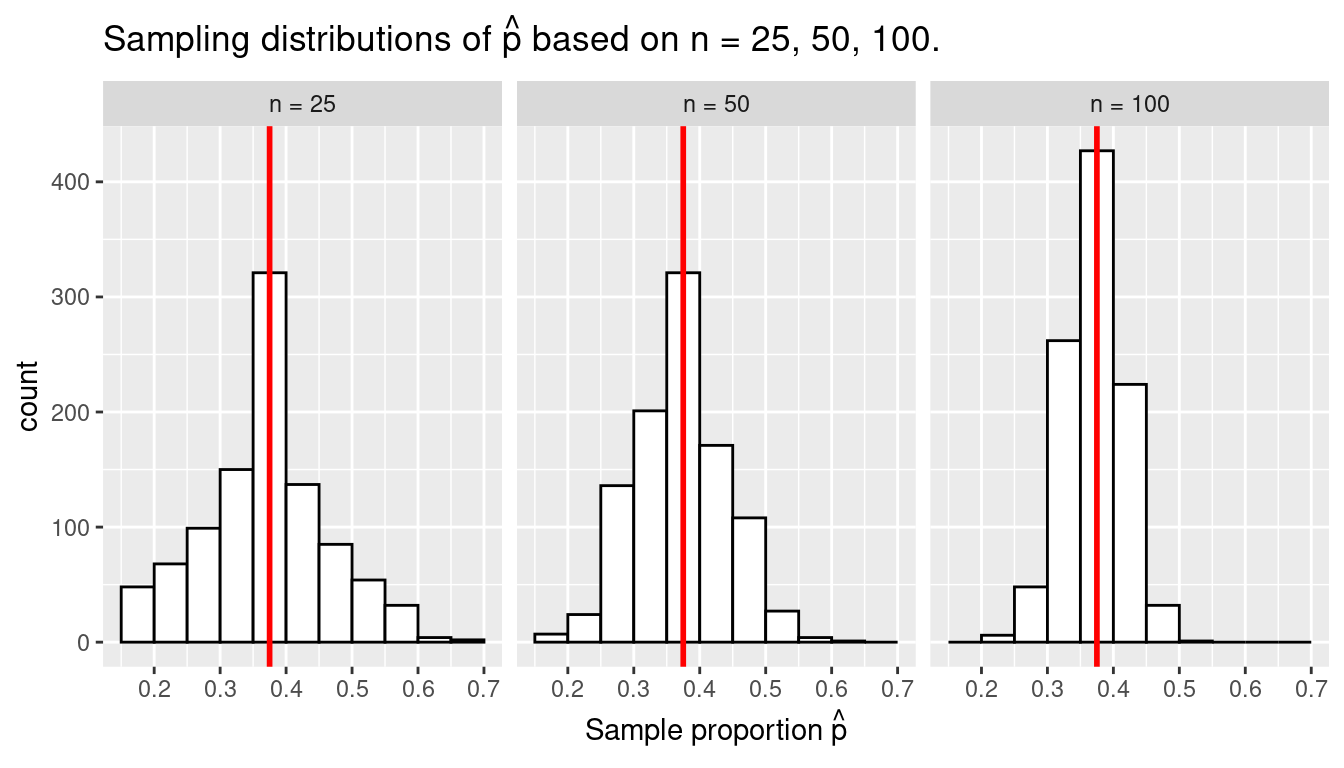 We also saw in this section that as your sample size \(n\) increases, your point estimates will vary less and less and be more and more concentrated around the true population parameter. This variation is quantified by the decreasing standard error. In other words, the typical error of your point estimates will decrease. In our sampling exercise, as the sample size increased, the variation of our sample proportions \(\widehat{p}\) decreased. You can observe this behavior in Figure 7.15. This is also known as having a precise estimate. 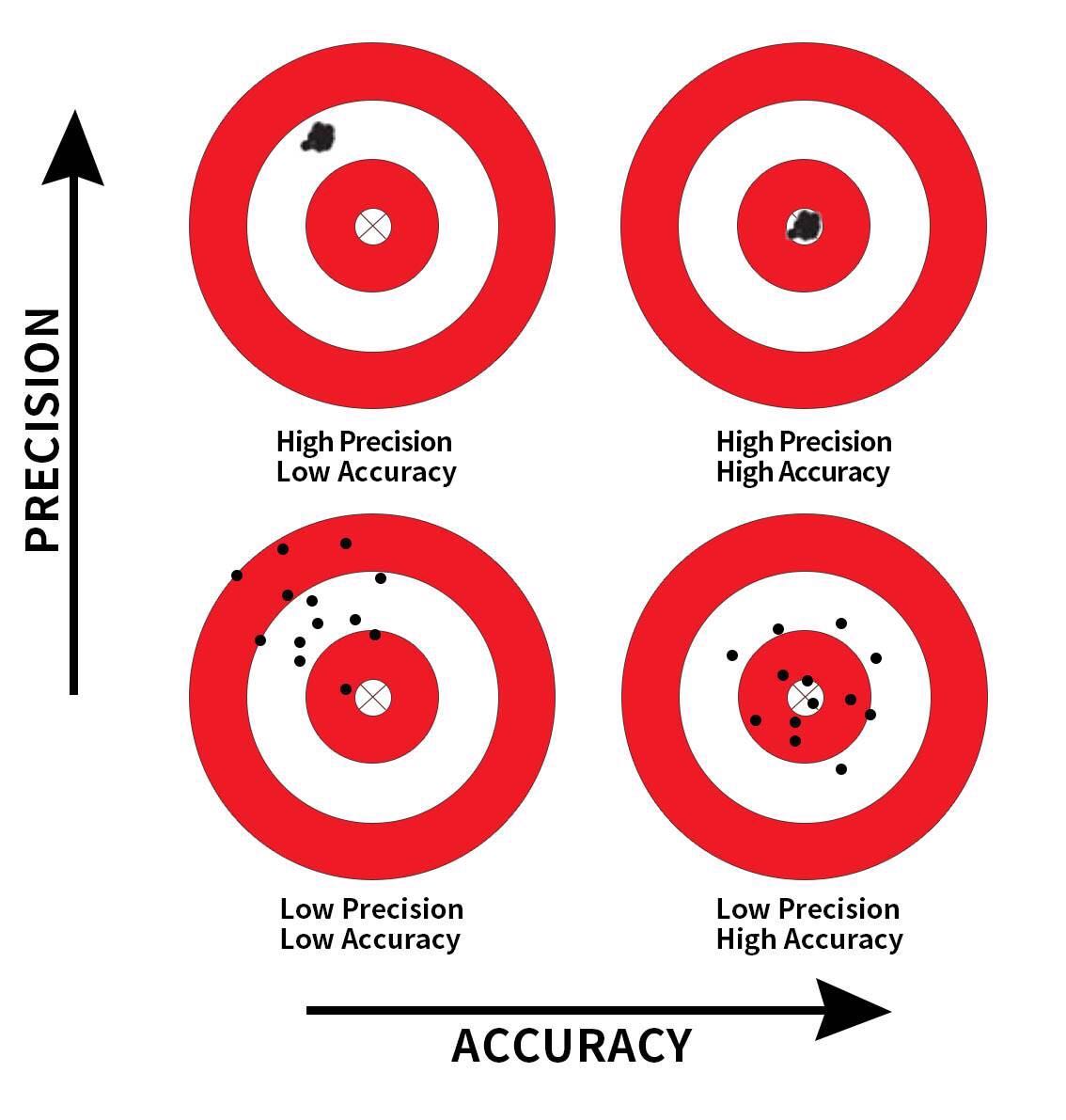 At this point, you might be asking yourself: “If we already knew the true proportion of the bowl’s balls that are red was 37.5%, then why did we do any sampling?”. You might also be asking: “Why did we take 1000 repeated samples of size n = 25, 50, and 100? Shouldn’t we be taking only one sample that’s as large as possible?”. If you did ask yourself these questions, your suspicion is merited!

The sampling activity involving the bowl is merely an idealized version of how sampling is done in real life. We performed this exercise only to study and understand:

This is not how sampling is done in real life. In a real-life scenario, we won’t know what the true value of the population parameter is. Furthermore, we wouldn’t take 1000 repeated/replicated samples, but rather a single sample that’s as large as we can afford. In the next section, let’s now study a real-life example of sampling: polls.

(LC7.17) What is the difference between an accurate and a precise estimate?

(LC7.20) Figure 7.16 with the targets shows four combinations of “accurate versus precise” estimates. Draw four corresponding sampling distributions of the sample proportion \(\widehat{p}\), like the one in the leftmost plot in Figure 7.15.