We also mentioned that this sampling activity does not reflect how sampling is done in real life. Rather, it was an idealized version of sampling so that we could study the effects of sampling variation on estimates, like the proportion of the shovel’s balls that are red. In real life, however, one would take a single sample that’s as large as possible, much like in the Obama poll we saw in Section 7.4. But how can we get a sense of the effect of sampling variation on estimates if we only have one sample and thus only one estimate? Don’t we need many samples and hence many estimates?

The workaround to having a single sample was to perform bootstrap resampling with replacement from the single sample. We did this in the resampling activity in Section 8.1 where we focused on the mean year of minting of pennies. We used pieces of paper representing the original sample of 50 pennies from the bank and resampled them with replacement from a hat. We had 35 of our friends perform this activity and visualized the resulting 35 sample means \(\overline{x}\) in a histogram in Figure 8.11.

Let’s show you that this is the case by now comparing these two types of distributions. Specifically, we’ll compare

Here is the code you saw in Subsection 7.2.3 to construct the sampling distribution of \(\widehat{p}\) shown again in Figure 8.33, with some changes to incorporate the statistical terminology relating to sampling from Subsection 7.3.1.

An important thing to keep in mind is the default value for replace is FALSE when using rep_sample_n(). This is because when sampling 50 balls with a shovel, we are extracting 50 balls one-by-one without replacing them. This is in contrast to bootstrap resampling with replacement, where we resample a ball and put it back, and repeat this process 50 times.

Here is the code you previously saw in Subsection 8.5.1 to construct the bootstrap distribution of \(\widehat{p}\) based on Ilyas and Yohan’s original sample of 50 balls saved in bowl_sample_1.

Now that we have computed both the sampling distribution and the bootstrap distributions, let’s compare them side-by-side in Figure 8.35. We’ll make both histograms have matching scales on the x- and y-axes to make them more comparable. Furthermore, we’ll add: 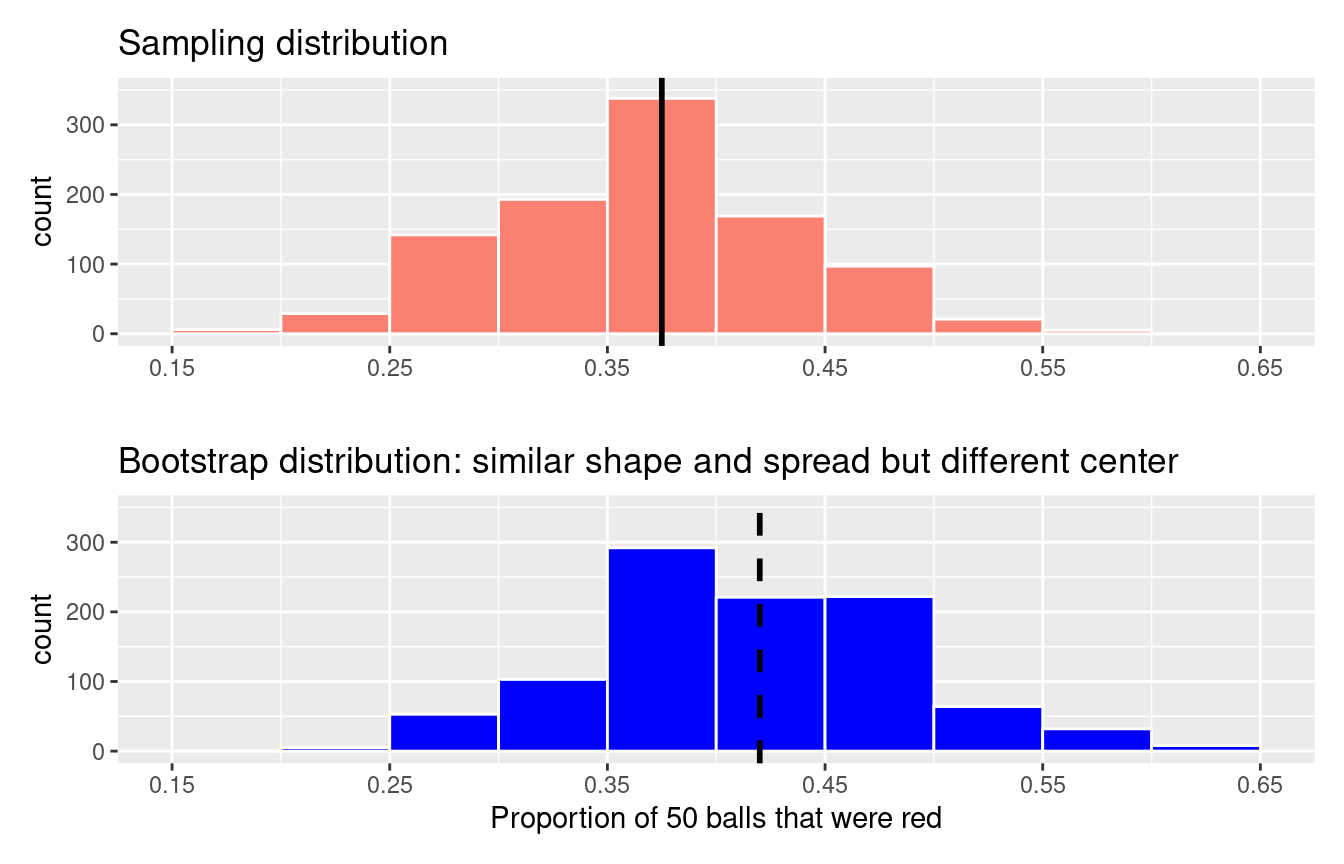 FIGURE 8.35: Comparing the sampling and bootstrap distributions of \(\widehat{p}\).

There is a lot going on in Figure 8.35, so let’s break down all the comparisons slowly. First, observe how the sampling distribution on top is centered at \(p\) = 0.375. This is because the sampling is done at random and in an unbiased fashion. So the estimates \(\widehat{p}\) are centered at the true value of \(p\).

The bootstrap distribution will likely not have the same center as the sampling distribution. In other words, bootstrapping cannot improve the quality of an estimate.

Even if the bootstrap distribution might not have the same center as the sampling distribution, it will likely have very similar shape and spread. In other words, bootstrapping will give you a good estimate of the standard error.

Thus, using the fact that the bootstrap distribution and sampling distributions have similar spreads, we can build confidence intervals using bootstrapping as we’ve done all throughout this chapter!

So far in this chapter, we’ve constructed confidence intervals using two methods: the percentile method and the standard error method. Recall also from Subsection 8.3.2 that we can only use the standard-error method if the bootstrap distribution is bell-shaped (i.e., normally distributed).

In a similar vein, if the sampling distribution is normally shaped, there is another method for constructing confidence intervals that does not involve using your computer. You can use a theory-based method involving mathematical formulas!

The key observation to make here is that there is an \(n\) in the denominator. So as the sample size \(n\) increases, the standard error decreases. We’ve demonstrated this fact using our virtual shovels in Subsection 7.3.3. If you don’t recall this demonstration, we highly recommend you go back and read that subsection.

Let’s compare this theory-based standard error to the standard error of the sampling and bootstrap distributions you computed previously in Subsection 8.7.1 in Table 8.6. Notice how they are all similar!

Observe that the standard error has gone down from 0.0698 to 0.0494. In other words, the “typical” error of our estimates using \(n\) = 100 will go down and hence be more precise. Recall that we illustrated the difference between accuracy and precision of estimates in Figure 7.16.

Why is this formula true? Unfortunately, we don’t have the tools at this point to prove this; you’ll need to take a more advanced course in probability and statistics. (It is related to the concepts of Bernoulli and Binomial Distributions. You can read more about its derivation here if you like.)

Using these theory-based standard errors, let’s present a theory-based method for constructing 95% confidence intervals that does not involve using a computer, but rather mathematical formulas. Note that this theory-based method only holds if the sampling distribution is normally shaped, so that we can use the 95% rule of thumb about normal distributions discussed in Appendix A.2.

Yohan and Ilyas are 95% “confident” that the true proportion red of the bowl’s balls is between 28.3% and 55.7%. Given that the true population proportion \(p\) was 0.375, in this case they successfully captured the fish.

In Step 4, we defined a statistical quantity known as the margin of error. You can think of this quantity as how much the net extends to the left and to the right of the center of our net. The 1.96 multiplier is rooted in the 95% rule of thumb we introduced earlier and the fact that we want the confidence level to be 95%. The value of the margin of error entirely determines the width of the confidence interval. Recall from Subsection 8.5.3 that confidence interval widths are determined by an interplay of the confidence level, the sample size \(n\), and the standard error.

If you look towards the end of the article, it also states: “The poll’s margin of error was plus or minus 2.1 percentage points.” This is precisely the \(\text{MoE}\):

Their poll results are based on a confidence level of 95% and the resulting 95% confidence interval for the proportion of all young Americans who support Obama is:

Confidence intervals based on 33 tactile samples

Let’s revisit our 33 friends’ samples from the bowl from Subsection 7.1.3. We’ll use their 33 samples to construct 33 theory-based 95% confidence intervals for \(p\). Recall this data was saved in the tactile_prop_red data frame included in the moderndive package:

In Figure 8.36, let’s plot the 33 confidence intervals for \(p\) saved in conf_ints along with a vertical line at \(p\) = 0.375 indicating the true proportion of the bowl’s balls that are red. Furthermore, let’s mark the sample proportions \(\widehat{p}\) with dots since they represent the centers of these confidence intervals. 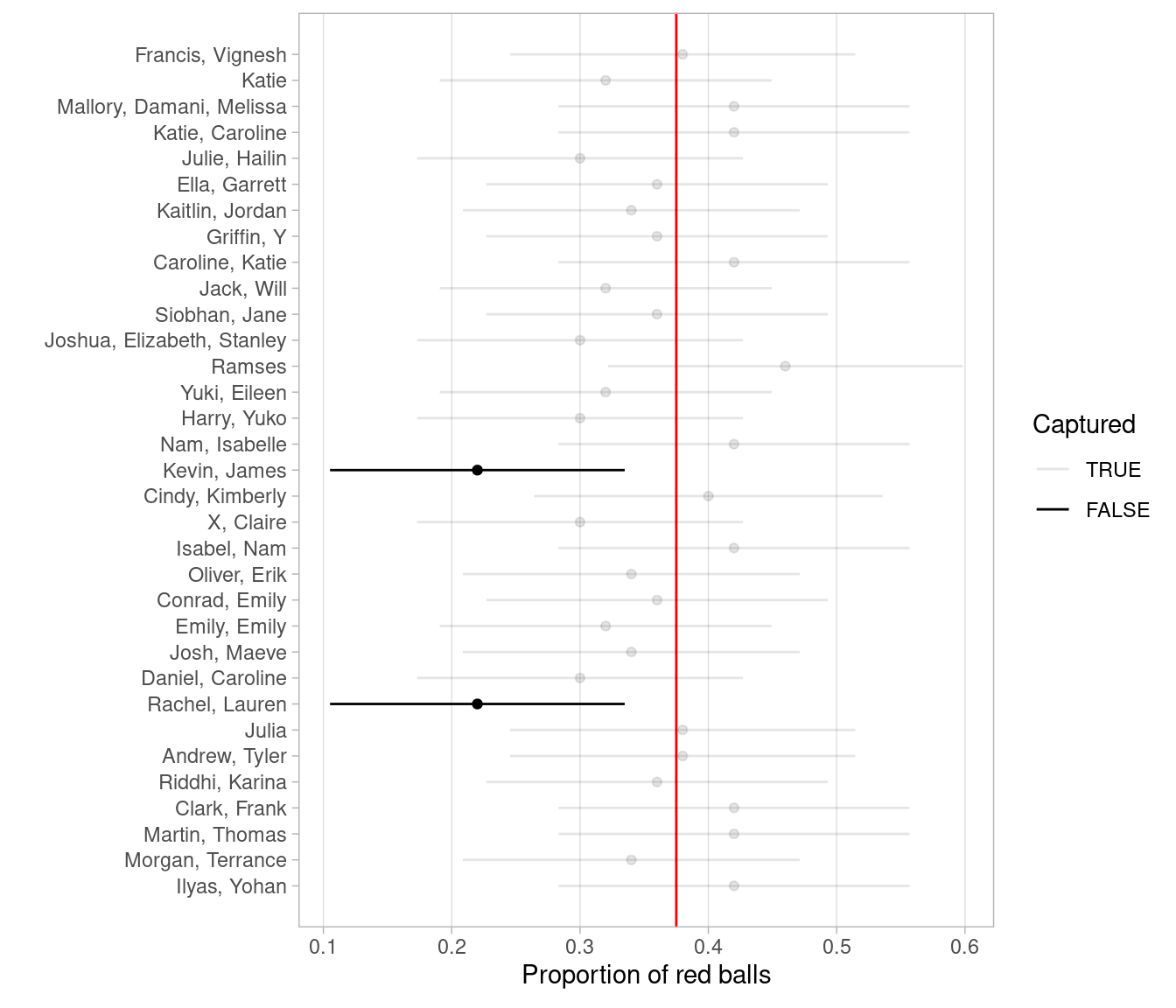 Theory-based methods like this have largely been used in the past because we didn’t have the computing power to perform simulation-based methods such as bootstrapping. They are still commonly used, however, and if the sampling distribution is normally distributed, we have access to an alternative method for constructing confidence intervals as well as performing hypothesis tests as we will see in Chapter 9.

If you want more examples of the infer workflow to construct confidence intervals, we suggest you check out the infer package homepage, in particular, a series of example analyses available at https://infer.netlify.app/articles/.